There have been some impressive flights this year. Prize giving lunch on Sunday November 29 where the new trophy will be presented in memory of Anthony Smith. ( With grateful thanks to the anonymous donor.) 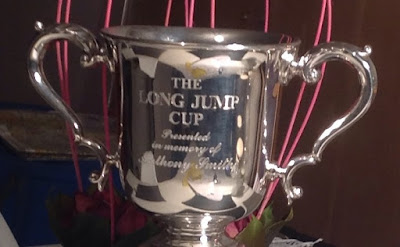 29 October - time to write your reports!

I have had one report sent in, so get writing folks and send them in. Pictures, videos all welcome. Various pictures have appeared on social networking sites..... 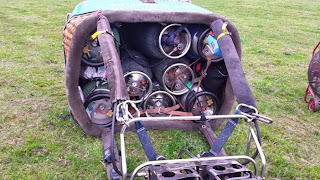 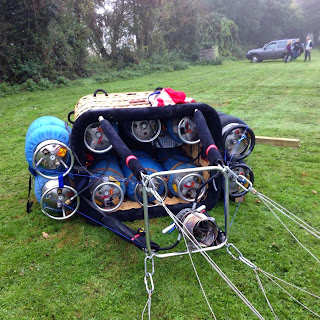 Fairly unsettled weather today. Rain in the south and the same for northern areas later.

This week looks likely to bring a transition to a westerly or southwesterly flow, although there is a hint in some of the models that the pressure will build for a time in the south. If this happens it could be a signal that a northwest/southeast split is on the cards.
This would mean the north and west would see the bulk of the unsettled conditions with wet and windy weather in store. The south and east would see more in the way of bright and dry conditions but also cold nights with mist or fog at times. Alternatively if the pressure fails to build, the whole country would experience a mobile set-up bringing spells of wind and rain.

By the middle of October we look likely to see the type of weather that might described as typically autumnal. Although there will be some drier, brighter spells these will probably be punctuated by showers and longer spells of rain.
Once again the north and west looks most likely to see the majority of the wind and rain with the southeast more favoured for something drier and brighter. Temperatures will probably be fairly typical for the time of year with some cold nights likely, with mist and fog at times as well as the chance of wintry showers in parts of Scotland.

October started with glorious weather for The Grass Roots Meet and perhaps a Long Jump flight? Who knows. Pilots traditionally keep their cards close to their chest.

Daily weather info is posted on the main website HERE.
Posted by Robin. at 07:40 No comments:

One week left to send in your entry.

Only 1 week left to send in your entry ( not that I am too strict).
So let me know your details and start borrowing tanks.

There's still lots to add, but the basics are there.
Posted by Robin. at 13:11 No comments:

GARY DAVIES won the 2010 Long Jump flying with Alan Gray in a Cameron Z120.
They flew for 5 hours and covered 140 miles from Hungerford to Norfolk.

Second place goes to Richard Penney and Spencer Craze who flew their Ultramagic M90 with 132 miles in 6hours 30 mins from Nottinghamshire to to Berkshire on 24 October.
The only other report received was from Long Jump stalwart Richard Parry who flew on 17 October in a Cameron N90 from Chalford to Minchinhampton. About 5km. But it was a memorable day and he flew alongside Dave Bareford’s son Dominic perform his solo flight.
Richard blames his comparative lack of traditional Long Jump adventurous spirit on his recent competition flying all over the world.  See his report HERE!!

The Great British Long Jump 2010
Well here we are again back doing the long jump!  After last year’s cock up with the mileage I sent my GPS to Lindsay Muir for an accurate distance LOL.
So Adrian Waters, Steve Drawbridge and Mark Omega and I set out  early to Folly Farm, Hungerford in the lovely Cotswolds. We had an ordinary journey down with all the usual stops, Adrian’s breakfast parlour at the bikers’ favourite pull in. (Silverstone)
We met Pete Bish at the field to let us in. Adrian bought himself an air band radio – not sure what he was going to use it for!
We set up the balloon, Oh Zenith what a work horse she is! She never lets us down.  Alan Gray was my passenger for the flight (he’s top crew man and chief navigator).
Our take off had fantastic conditions, blue sky, good upper wind and good direction.
After 20 minutes we were crossing between Brize Norton and Benson airport squeezing through without them noticing.  Time for a coffee and sugar rush, Alan was doing really well on the navigation, we were roughly using 55 litres an hour – less as we got lighter.  We then travelled to Cranfield where we spoke to a very busy airport that day and were pleased that we called and stayed at 4,500ft until we passed.
The fluffy clouds had arrived by this time and were getting a bit menacing with black areas spreading.  Alan said, ‘I will keep an eye out for them.’  I just said, ‘Look the other way and don’t worry!’
So onwards  and upwards to Bedfordshire, Peterborough then over our patch  Wisbech. Then we tried to get more left to go up to Coningsby however the southerly winds didn’t kick in as forecast so we decided to take the height with right and went across the east coast so covering Kings Lynn then Sandringham, couldn’t see her Majesty waving in the grounds.  The sea looks awfully close “much” said Alan “please don’t go left when we come down”.
We started our descent over Sedgefield, Norfolk and luckily stayed on track for Brancaster love the candy floss there!  We had around 12 to 13 knots on landing in a great stubble field along the main road between Docking and Ringstead and couldn’t find a landowner for love or money.
We had a brilliant day 5 hours in my lovely balloon with great company, direction and retrieve that I was so pleased I was not involved with!
Adrian can tell that story.
Regards, Gary. 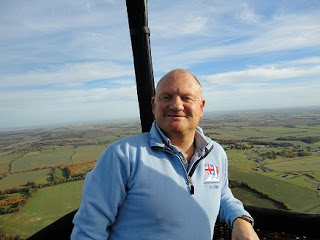 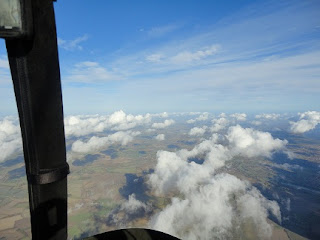 And then send in your reports with all the pictures, stories, lies, truths that you can muster.

Traditionally, we have a presentation lunch near the end of November but this year I helping Anthony Smith with his RAFT!!   Click HERE

The container leaves on 11th and we fly out to meet it on Montgolfier Day.

So what do people think?  Since I have only received 2 results so far and one report, I wonder if there's time to arrange something before I leave?